Are You Wondering “Should I Buy Property in Detroit?”

I just got back from a real estate seminar, and when people hear that I’m from the Detroit area, I often get the question, “Should I buy property in Detroit?”

And I always tell them, “It depends.”

Today I’m going to explain why I say that. I think people expect a yes or no answer, but I honestly don’t think it’s that cut-and-dry.

In fact, some might prefer to make money off of properties in the area in a more passive manner.  Below is a video I made on the topic that might be of interest.

If you’re more interested in being more involved, skip the video, and proceed below.

I truly think it depends on your risk tolerance, how much you’re willing to spend, and a bunch of other factors.

Related: Why I Prefer Homes For Sale in Detroit Suburbs

They’re of the mindset that they’re willing to own cheap rental properties here-and-there in the city, but that’s about it.

But I also have some friends that wouldn’t touch property in the city of Detroit with a 10-foot pole, REGARDLESS of what neighborhood the house in.

Why We Only Buy-and-Hold in Detroit

We only buy-and-hold in the city.  And we won’t even consider buying a house in Detroit unless it sits on a nice block. 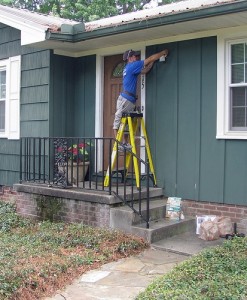 But we won’t do rehab jobs in the city, for a couple reasons in-particular:

That’s not a big enough profit to make it worth the hassle of going through a rehab in my opinion.

There are a couple other issues that go into our decision not to flip in Detroit, but those are the main two.

Related: 15 Ways to Find Tenants for Your Rent to Own Homes in Detroit Michigan

Next: Population Decline in Detroit, the Impact of Crime, and More…