Why I Prefer Homes For Sale in Detroit Suburbs

Buying in the city has its advantages.

But if I had to choose between homes for sale in the Detroit suburbs versus homes in Detroit, I’d choose the suburbs, and today I’m going to tell you why.

Related: What You Should Know Before You Try to Flip Detroit Homes

I was going to try to dig-up some statistics to prove my point, but who needs statistics?

The more crime going on in an area, the less attractive your real estate is going to be in that area.

Regardless of whether you’re talking about renting it out, or selling it.

Let-alone the impact of the crime on the value of that property.

Yeah, generally-speaking, properties in the city are cheaper than houses in the suburbs.

But from a peace of mind standpoint, if I had to choose between having a rental property in Detroit versus one in the suburbs, I’d choose the suburbs hands-down.

To be honest, my opinion could very well be at least somewhat influenced by the media, and what they choose to report.

But I very rarely hear about carjacking’s, murders and stuff like that taking place in the suburbs as much as it’s reported in the city.

I’ve experienced having a vacant rental house before in Detroit, and I’d dang-near have sleepless nights.

Related: How to Protect Your Detroit Vacant Homes

My mind used to just wander, thinking about who could be tampering with the house and so forth.

Granted, I was a newbie back then, but I’d still have more peace of mind having a vacant property in the suburbs somewhere than in 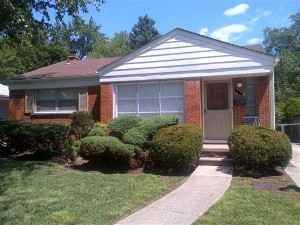 And yeah, I know that there are some rough parts in a lot of the suburbs where stuff can happen to your house, but still.

Now from a cash flow standpoint, depending on how the property was purchased (i.e. cash vs. financing), a Detroit property might get the nod. But it wouldn’t be by much.

Especially when you consider how high the property taxes and insurance rates are in Detroit.

You can cash flow on properties in the suburbs too.

They just cost more, so your cash-on-cash return is probably going to be less than on a property in Detroit.

Next: Being a Landlord in Detroit vs. the Suburbs, Detroit Population Decline, and More…